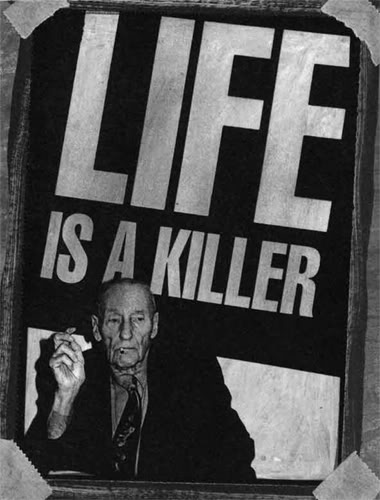 William S Burroughs (1914-1997), is one of the most influential, and yet much maligned writers of the Twentieth Century.  He has been described by critical legal theorist Nathan Moore as, “… one of the most fundamental diagnosticians of the 20th century [in] the role of power and beyond.”  As one of the central contributors of the Beat Generation, Burroughs’ work traverses both life and fiction:  his life being one of nihilism, his characters repeating the suppurating atmosphere.  His infamous ‘Naked Lunch’, known for kick-starting his use of the ‘cut-up technique’, is an exemplifier for his unique, demonic and lasting presence within not just literary fiction, but poetry, art, and sound.  He dissembles, fragments, disobeying literature’s prescriptive control.  The autobiographical nature of his work allows for an almost corporeal account of his characters, through the lived void of Burroughs’ ongoing experience and emotion  (or lack thereof), his addictive underworld.  It is for this reason, as one fundamental user and abuser of law, (and one simultaneously not receiving the established literary acclaim that he is due, as a result of the controversy of his life and works), that Burroughs has been chosen for discussion in a workshop of papers in relation to law.

How does law relate to Burroughs’ writing style, his experiences in life, and the way law is evaded, understood and utilised in symbiosis?  What does Burroughs, as a gay man in intolerant times, speak to in relation to law and gender?  Is Burroughs a revolutionary or a control freak?  Through Burroughs’ ongoing recollection of his infamous opiate addiction, he gives us the ‘interzone’, the world between human will and its negation:  “… The point at which, in the absence of the drug, speech at all becomes possible, but correlatively, the point at which the drive toward resumed addiction is at its strongest.”  What is this movement in between two ways of being, and what does it say about law?

Burroughs’ work will be discussed through the themes of ‘Nova Law’, ‘Interzone’ and ‘Control’, through an exciting array of papers from:  Nathan Moore (Birkbeck College, University of London), Oscar Guardiola-Rivera (Birkbeck College, University of London), Laurent de Sutter (Free University of Brussels), Charlie Blake (Executive Editor, ‘Angelaki: Journal of the Theoretical Humanities’; founder member, STD, ‘Semiological Terrorists of Desire’), Thom Robinson (University of Sheffield) and Lucy Finchett-Maddock (University of Exeter).  To finish, there will also be a recital of Burroughs’ work by poets  Liz Adams and Jamie Wilkes, London Consortium.

Naked Lunch will be provided.